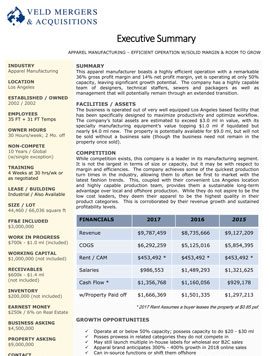 
This celebrated Beverly Hills area restaurant with beer, wine and sidewalk seating has established a strong reputation for its award winning European cuisine. The venue boasts fantastic street visibility in a highly popular shopping district and employment center (not in the Golden Triangle area) and has a coveted lease at what’s deemed to be well below market rate (< $4 psf). The facility has a full kitchen with a convection oven, a 6 burner stove/oven combination, a table top stove, grill, griddle and deep fryer. It has a 3 bucket sink and dishwashing unit as well as a large walk-in cooler.

Accounts Receivable Included in Asking
No


This restaurant leases for $4,700 per month plus $470 in triple net (NNN) expenses on a tremendous lease that does not expire until December 2021 with three 5 year options. All of the business's furniture, fixtures, equipment and Type 41 Beer & Wine License will be included in the sale. Approximately $75,000 in wine inventory will be sold at cost at close in addition to purchase price.


While competition exists, this is a well-established and quite well known venue. As such, it has created a name for itself and developed a loyal following that includes some of Hollywood’s best known personalities that would be impossible for an industry entrant to replicate.


While new management may wish to promote the venue, they will likely want to operate the restaurant in the traditional way that has proven to be successful over time! They may also wish to further capitalize on the premise’s extensive 350 label wine list.